Photos Of This Morning’s Lunar Eclipse

I got up way too early this morning, so I could witness the total eclipse of the moon. Despite my not-yet-caffeinated state, I managed to capture a few photos of the event to share with you.

In the first photo, taken at 6:48 Arizona time, the sky is still dark and the moon is about 40 percent eclipsed. 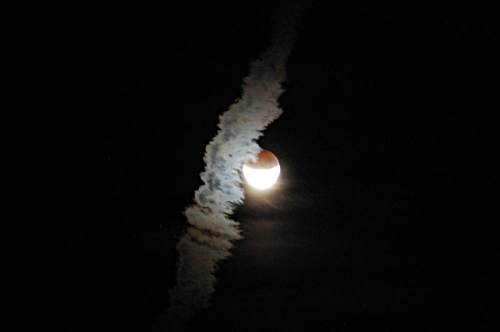 In the next photo, taken 25 minutes later at 7:13 the sky is already getting light and  Earth’s shadow is covering about 75 percent of the visible lunar surface.

In this last photo, taken only five minutes later at 7:18, coverage is almost full at about 90 percent.

Had I had a vantage point with an unobstructed view of the horizon, I’d have been able to see both the totally eclipsed moon to the west and the fully risen sun to the east a few minutes later.

This entry was posted in photography and tagged astronomy, eclipse, lunar, moon, photos. Bookmark the permalink.

7 responses to “Photos Of This Morning’s Lunar Eclipse”

What say you? Cancel reply