When it comes to cooking, a wood fire is about as old school as it gets. BioLite has brought the basic wood fire into the 21st century with their CampStove. 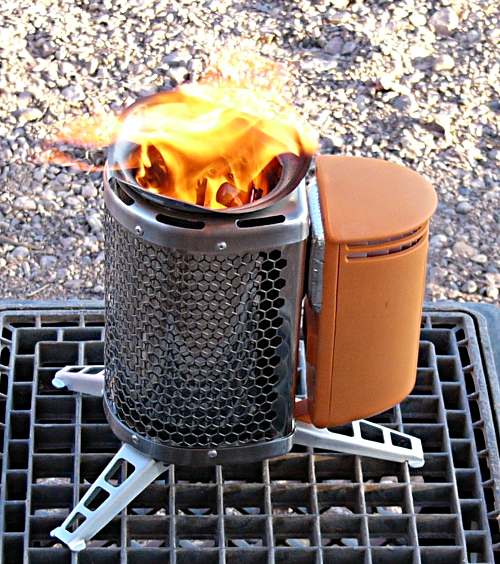 Why would I be interested in wood as a cooking fuel? My little motorhome has a fully equipped kitchen including a four-burner gas stove, but sometimes it’s just nice to cook outside. It also doesn’t hurt to be prepared for anything.

While BioLite’s target customer probably camps somewhat more primitively than I do, why would they even be interested? Compact gas and liquid fueled stoves are abundant, convenient, and reliable. I’d like to think that, for at least some, there is a simple romantic or nostalgic attraction to a wood fire, but there are other good reasons, too. How about not having to carry fuel and empty fuel containers? How about wood being a naturally renewable resource? Oh, and how about if, on top of all that, it could recharge your phone or other devices while it cooks your food?

Oh yeah. This is about as high-tech as cooking on wood gets. It uses forced ventilation for efficient burning, reduced emissions, and a really hot flame. And while there are other fan-driven wood camping stoves on the market, they all require batteries to run the fan, and that means batteries to remember and replace. The BioLite uses thermoelectric technology – the heat from the fire is converted to electricity to power the fan. Not only that, but it generates more electricity than it needs for its fan, and makes the surplus available via a USB jack so you can charge your phone, LED light, or other gadgets. Pretty neat, huh?

I first read about this sometime last year and just had to get my hands on one. At the time they were still in development, but they were taking email addresses of interested parties. I signed up and eventually forgot all about it until one day, out of the blue, I get an email telling me they’re accepting reservations for preorders. Eventually I was invited to place an actual order, which finally shipped last week and arrived this week!

I was impressed from the moment the UPS driver handed me the box. Much smaller than I was expecting. The box, that is. It was exactly the size it needed to be, but not a millimeter larger in any dimension. And no polystyrene peanuts nor plastic bags, either. BioLite gets extra points in my book for smart eco-friendly packaging. In the box was the stove (in a drawstring nylon stuff sack), a short USB cable (for initial charge-up of the internal battery), a handful of sawdust-and-wax fire starters in a waxed paper bag, and a sheet of instructions.

The stove is very well built. Excellent fit and finish. The “power module” (orange unit containing the fan and electronics) stores inside the fuel chamber. For use it attaches to the side of the fuel chamber and is securely held by extending the legs, one of which engages with a protrusion on the bottom of the power module.

I connected the power module, using the supplied USB jumper, to an AC powered charger to “condition” the battery prior to initial use. This is only necessary the first time, or if the stove is stored for more than six months.

The BioLite burns wood or other biomass, so I went about collecting some. It didn’t take long to collect a handful of twigs, plus some bark and pine cones fallen from nearby trees. I collected a variety from smaller than pencil thickness up to about as thick as my thumb. I broke them into about 5-inch lengths.

I attached the power module to the side of the stove and deployed the legs.  I loosely filled the fuel chamber with a few pieces of bark and the smallest of the twigs. I twisted a bit of newspaper up into a “stick” of sorts and stuffed it in. I lit the paper with a long barbecue style butane lighter, sticking it down to the bottom to get the bottom of the paper and some of the bark burning as well.

Once it looked like it was burning well enough, I started the fan (doing it too soon would just blow out the flame), and after another minute or two, it was going quite nicely, so I added a couple pine cones and some of the thicker twigs. I switched the fan to high and put on a pot of water.

While waiting for the water to boil, I watched for the LED bar above the USB jack to turn green, indicating that it was ready to use as a charger. I connected my combination cellphone and UHF/VHF radio and sure enough, the phone’s display indicated it was taking a charge. I was using fire to charge my HT/phone — how cool is that?

I probably should have started a timer, but it wasn’t three minutes before the water started to bubble a bit, and in less than  five it had achieved a vigorous boil. During that time I had to lift the pot once and feed the fire. I made myself a nice cup of tea and took some photos.

In all, I’m very pleased. I can honestly say the BioLite CampStove has exceeded my expectations. It’s a great little stove; burns hot and clean on a handful of twigs. It’s so efficient that it only left a couple of tablespoons of ash. I can also see it being really nice as a compact portable (tabletop, even?) campfire. I don’t know how often I’ll have a need for the USB charging feature, but it never hurts to have a backup plan. It might work nicely to directly power a small LED light — maybe to see what I’m cooking at night?

Oh, and  what’s more, BioLite is using sales of the CampStove to help fund the design and construction of a larger version for use in developing nations. For more info or to get your own CampStove, check out BioLiteStove.com.

What say you? Cancel reply